Today the hubby and I met our architect/designer at the house to review the latest plans for the master bathroom. It was the first time we've been in the house since our wonderful contractor, Mario from B and A Custom Painting, finished his work.  Even though I've been going to the house every other day or so, it was hard to see the progress through all of the tarps, tape and dust. 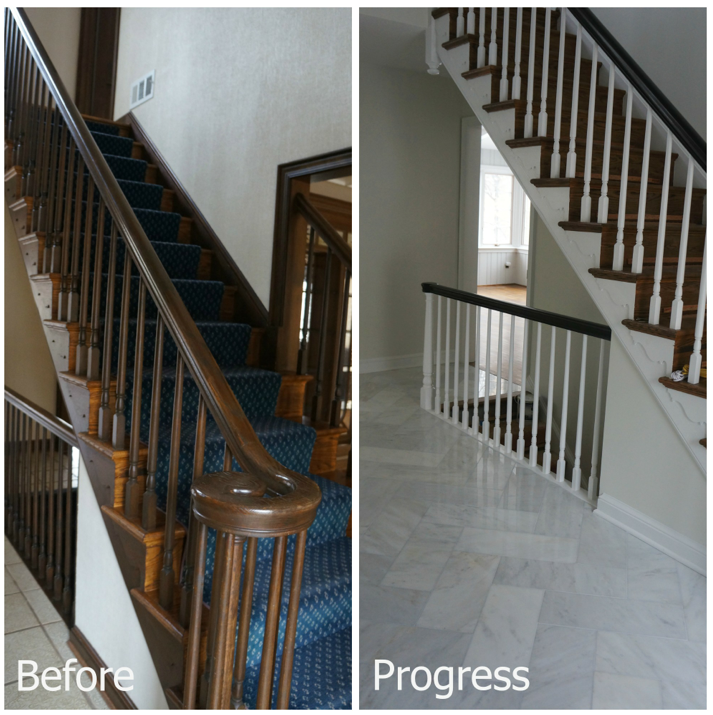 The dated tile has been replaced with marble laid in a herringbone pattern. The banister has been painted black and the spindles and trim have been painted white. The risers still need to be painted and a runner will be installed before we move in. We have selected a wool chevron runner to compliment the tile (sorry the picture isn't the best) 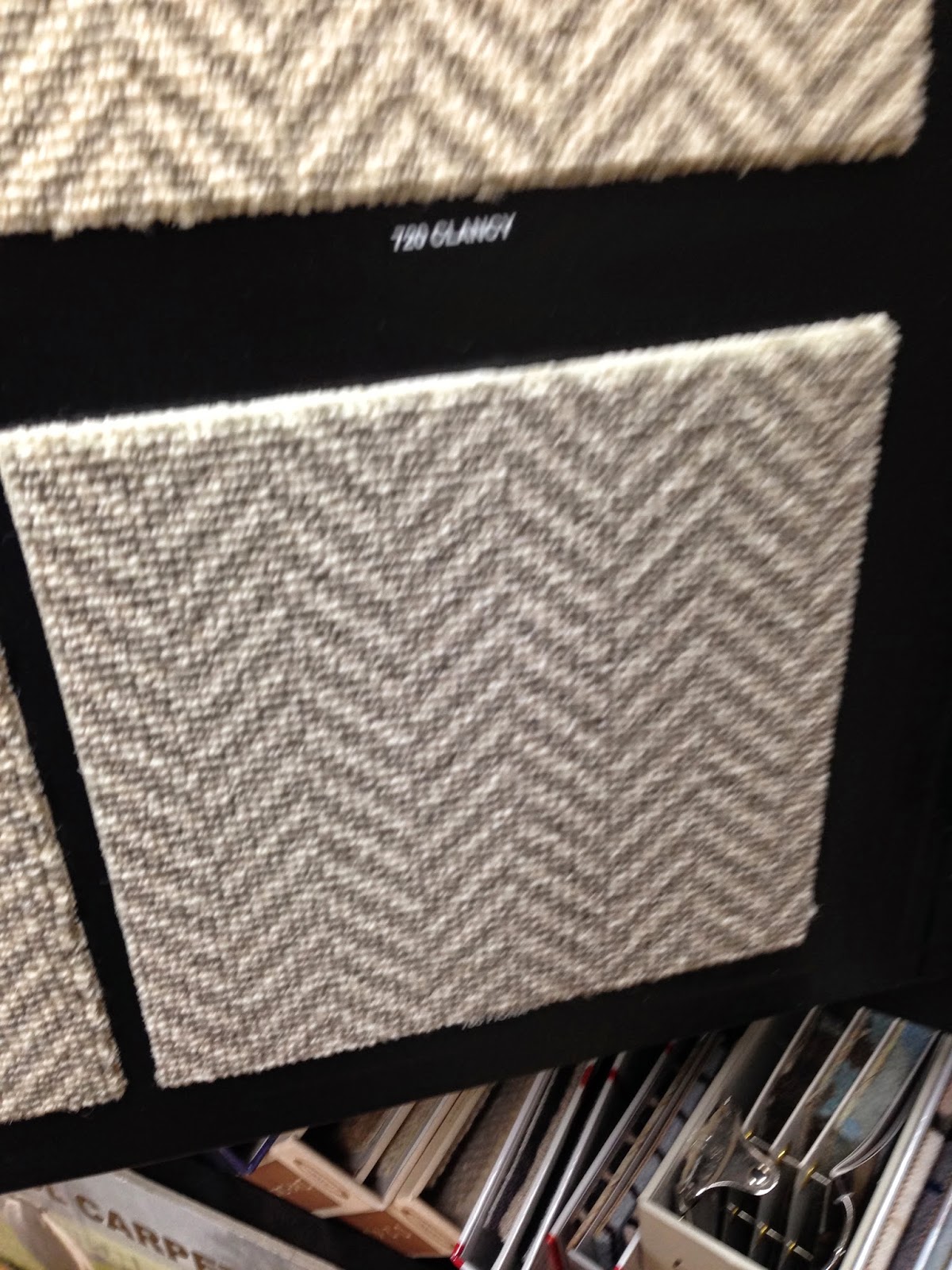 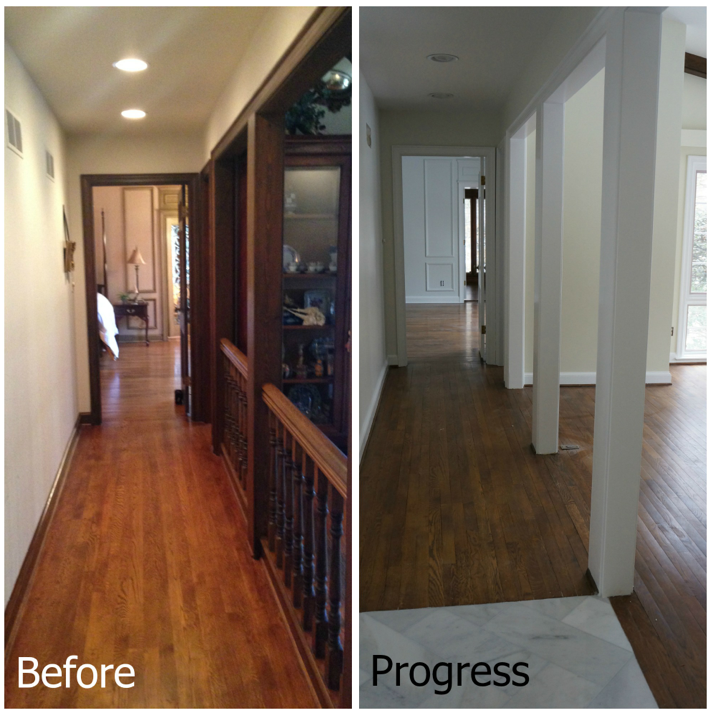 The hubby and I removed the railing between the hallway and the living room. It makes the room feel so much brighter, lighter, and more modern. 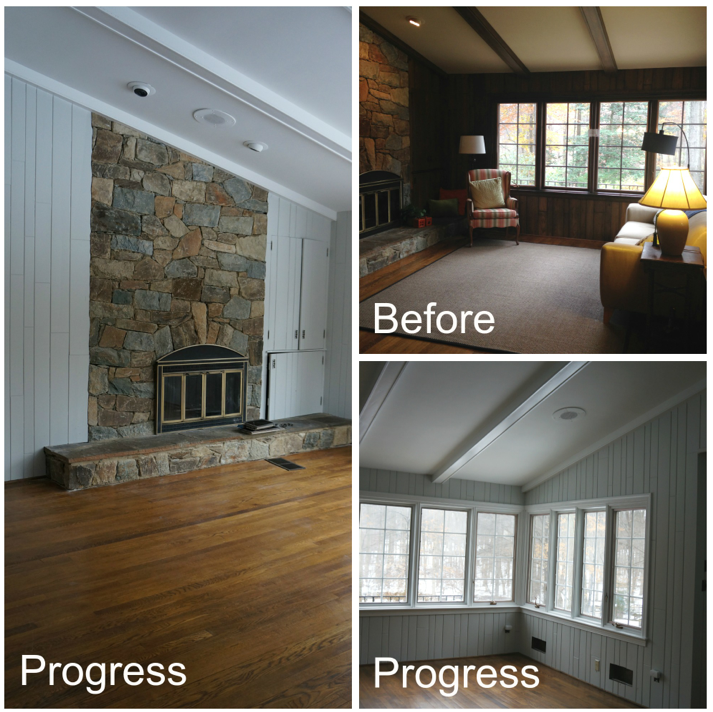 The den off the kitchen is now one of the brightest rooms in the house. We had the pine paneled walls painted a Benjamin Moore color called Wickham Gray. It really compliments the stone on the fireplace. I plan to remove the fire place screen before we move in. 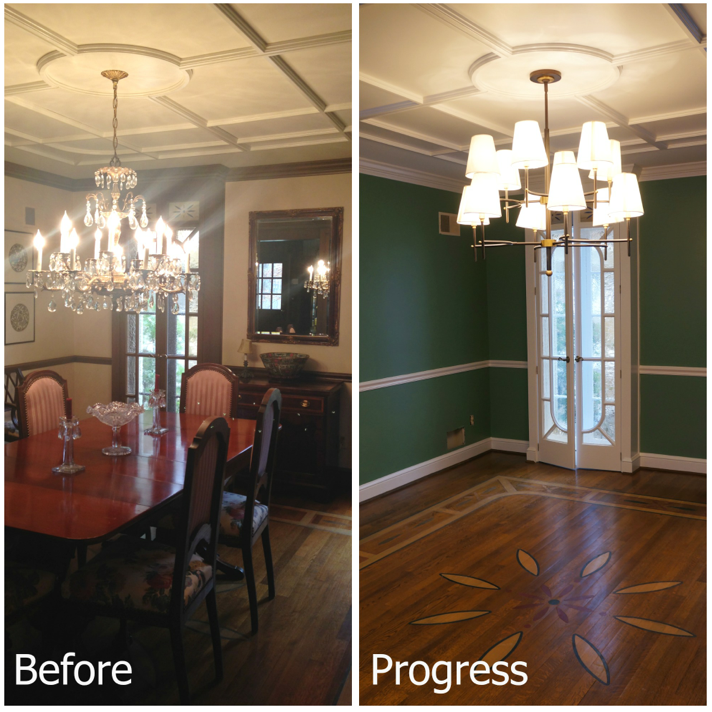 The dining room is also looking bigger and brighter. We really wanted to remove the door things around the windows, but it would require replacing the single pane windows behind them with really expensive custom windows. I am happy with our decision to paint them white, but I'm not thrilled about the decorative glass at the top of the doors. I have a plan for those. 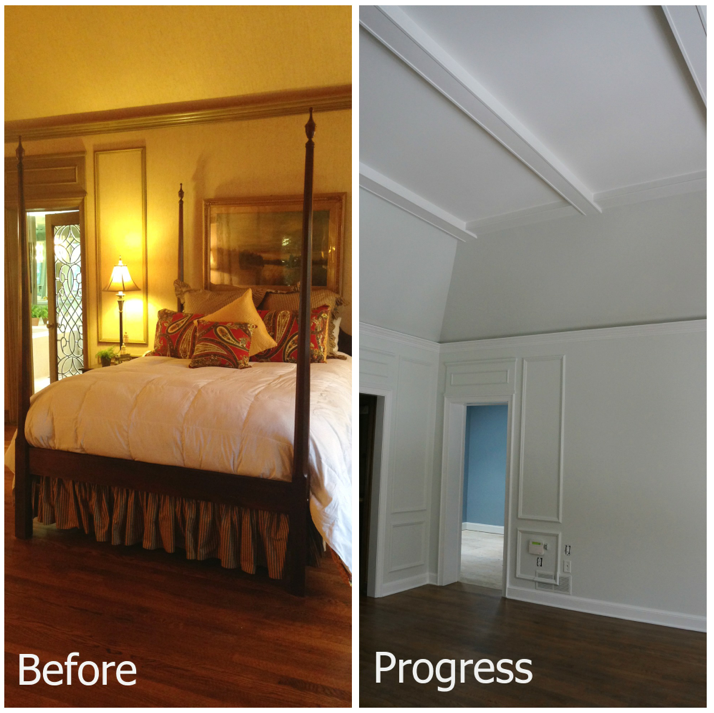 I can't wait to move into the master bedroom, but we are going to wait until the master bath remodel is done. That bit of blue through the door is our new master closet. It was a mirror covered pink "hers" bathroom. More on this transformation in a future post. 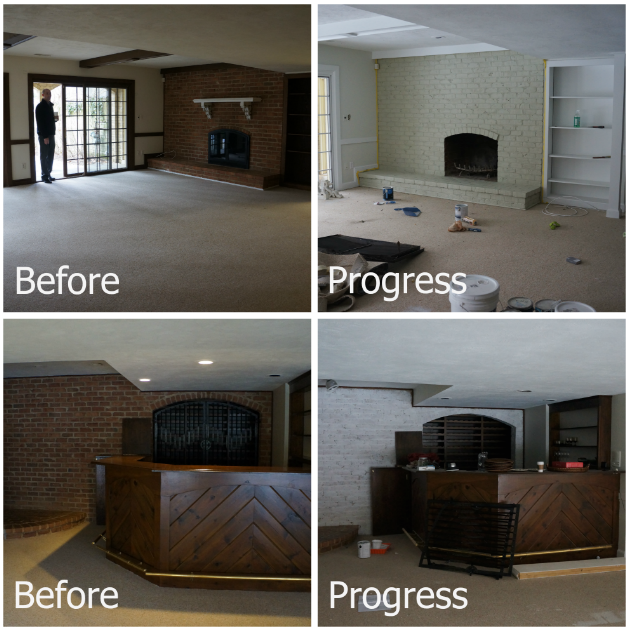 The basement is also nearing completion. I'm still working on the brick wall behind the bar. It will be painted the same color as the fireplace. The carpet won't be installed for a couple of weeks and I can't wait! The existing carpet is glue directly to the foundation (no padding) and looks like it belongs in a government office building.

The kids rooms are also coming together. Thankfully there was no wall paper to be removed in their rooms. My goal is to have the kids rooms totally finished before moving in. 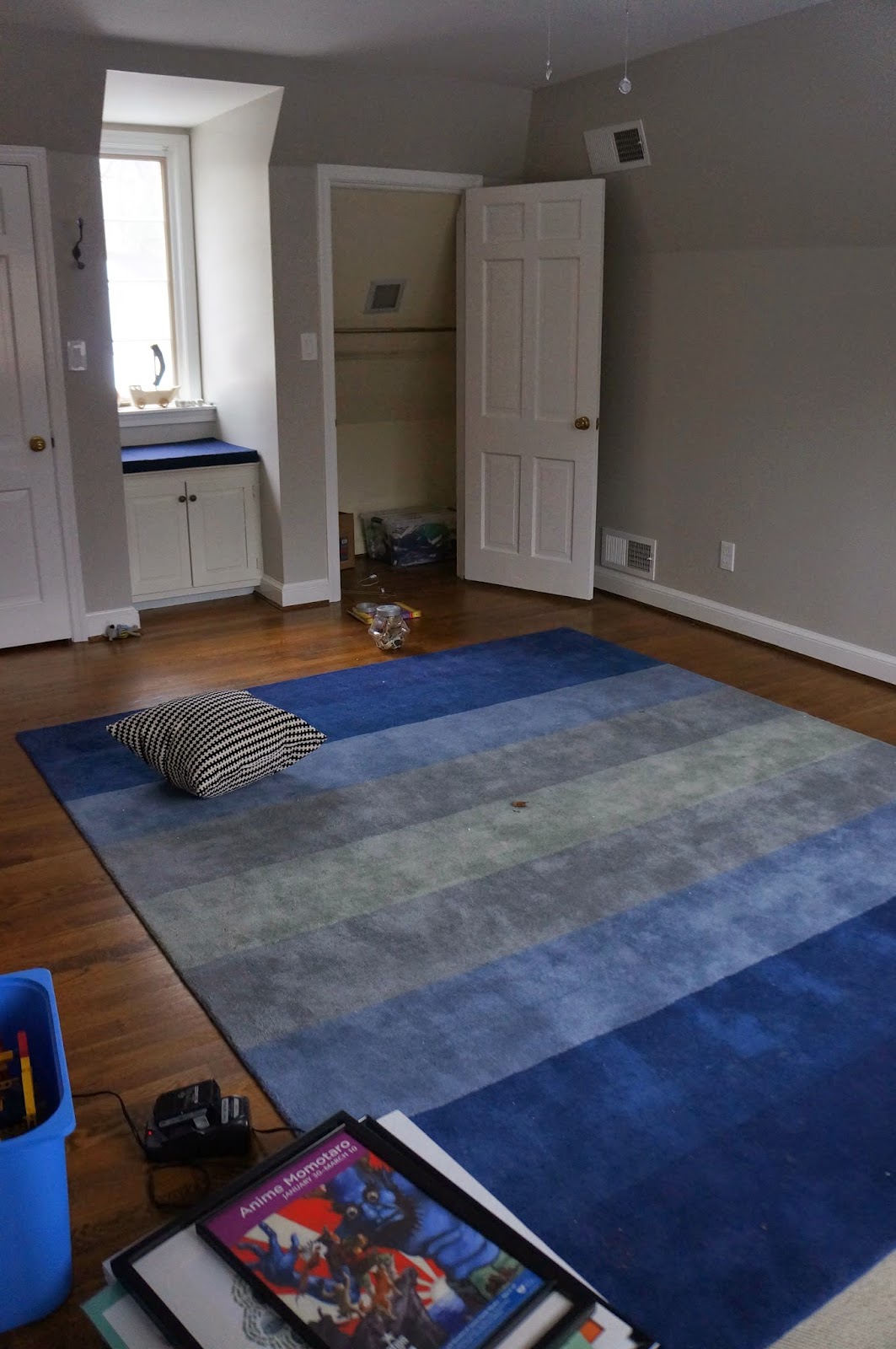 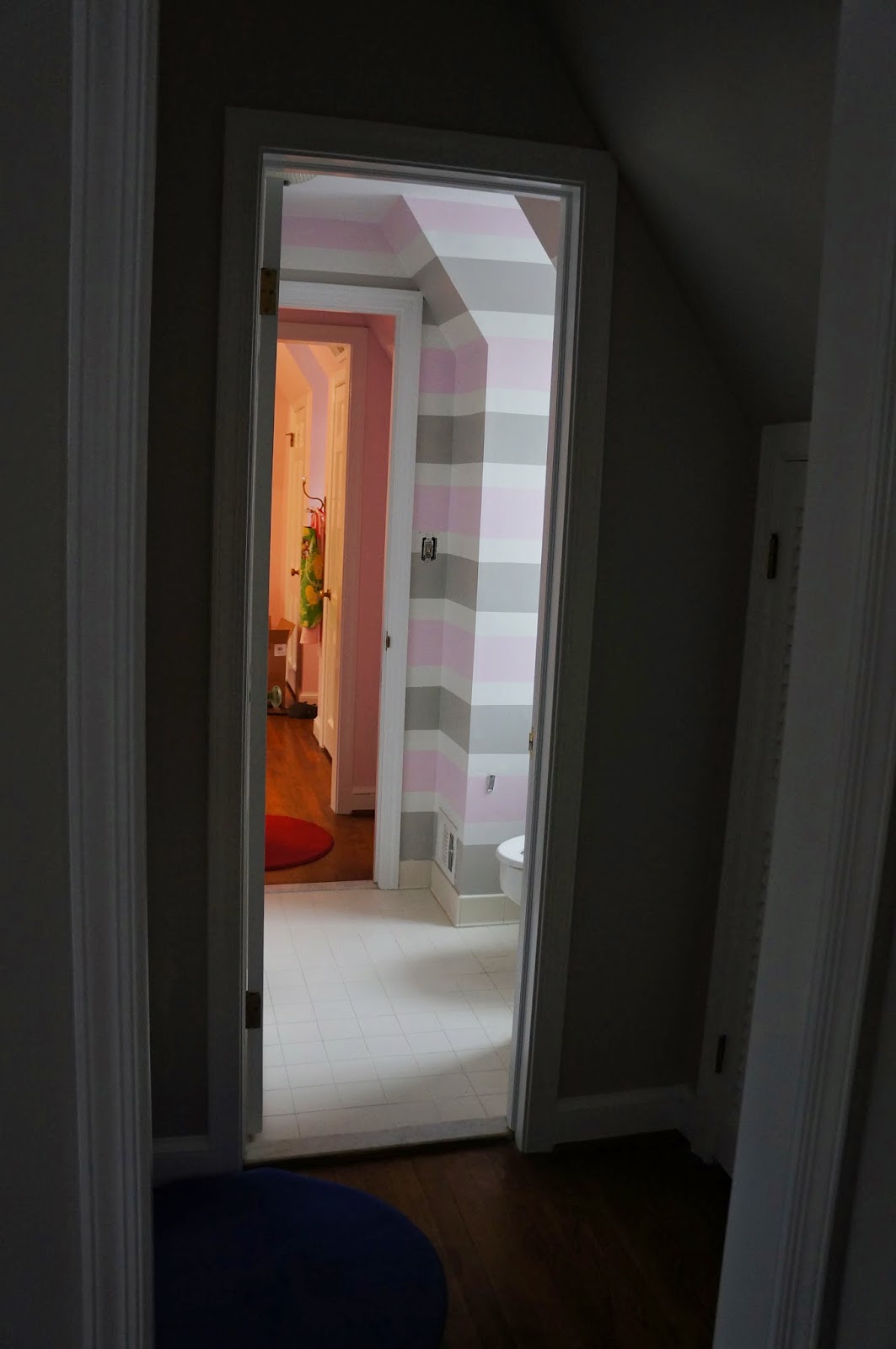 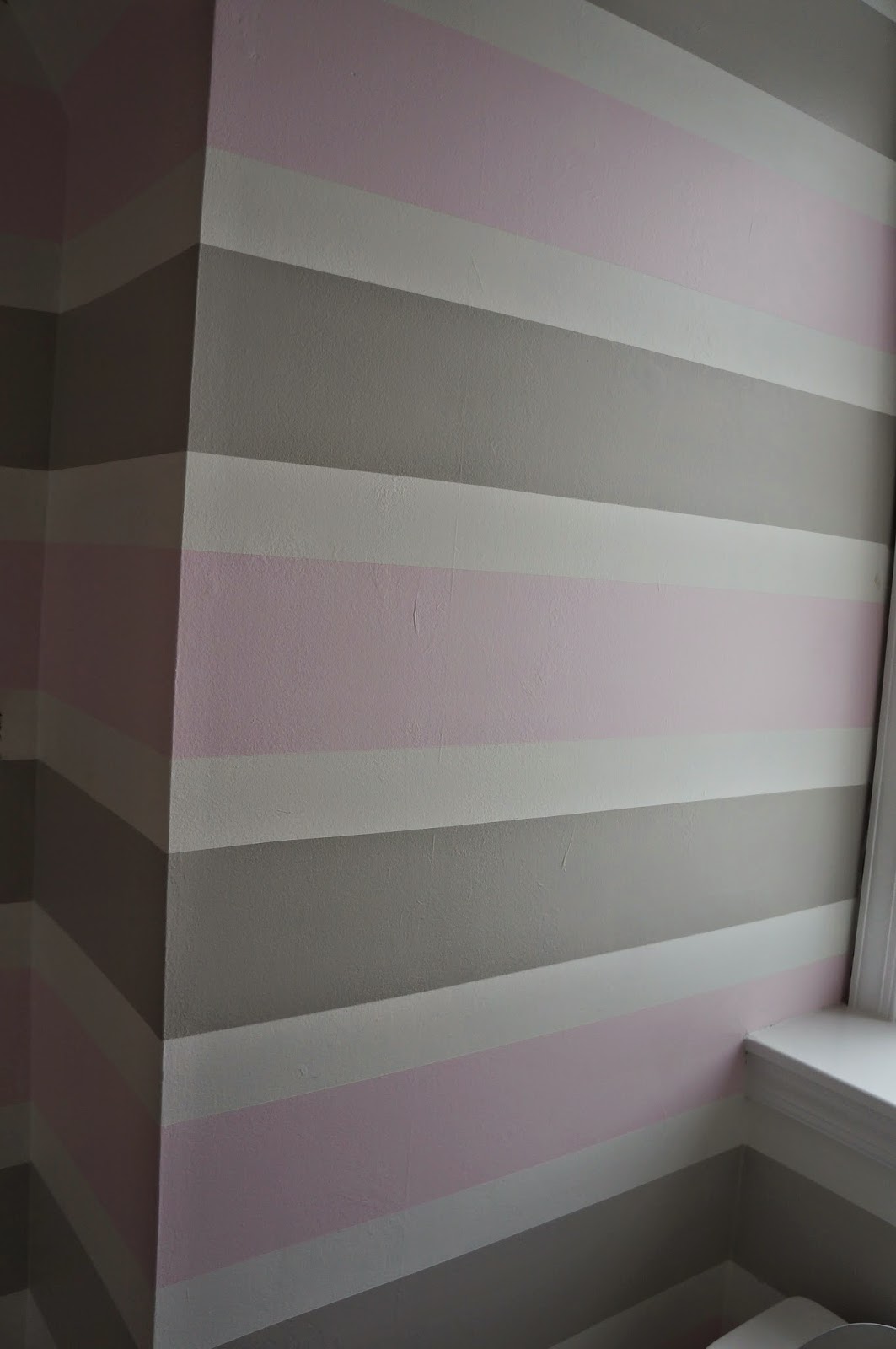 The kids bathroom had a floral mural painted on most of the walls. The mural has been replaced by pink, white, and grey stripes. More on this project in a future post. 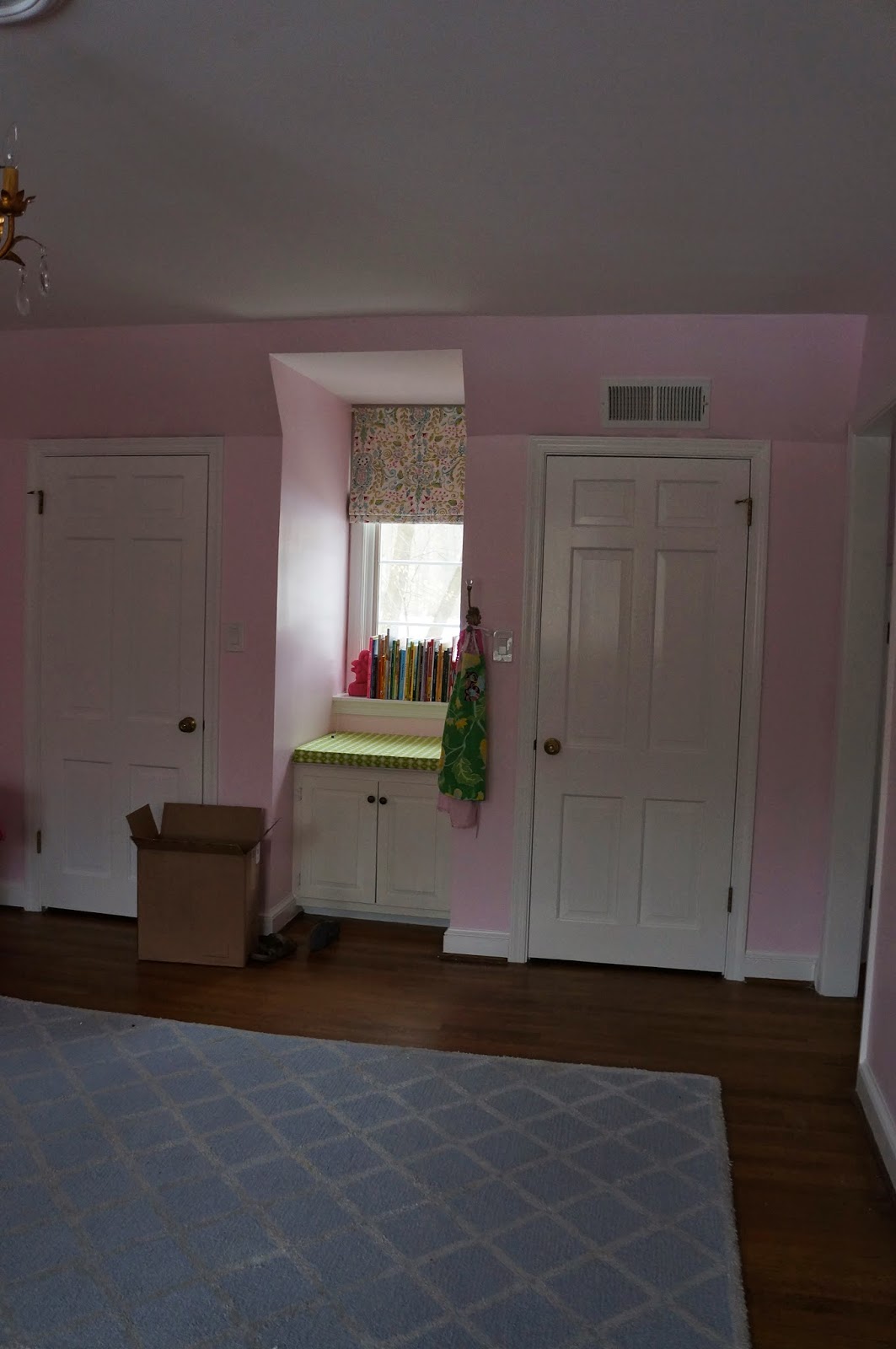 Of all of the work that has been done to date, the wall paper removal was the biggest project. The entire foyer and living room (including the ceilings) were covered with grass cloth wallpaper that had been painted over. It was really difficult to remove and the walls were in rough shape after it all came down. Nearly every wall in the foyer and living room had to be re-skimmed. Mario's team did a BEAUTIFUL job and the walls look brand-new. 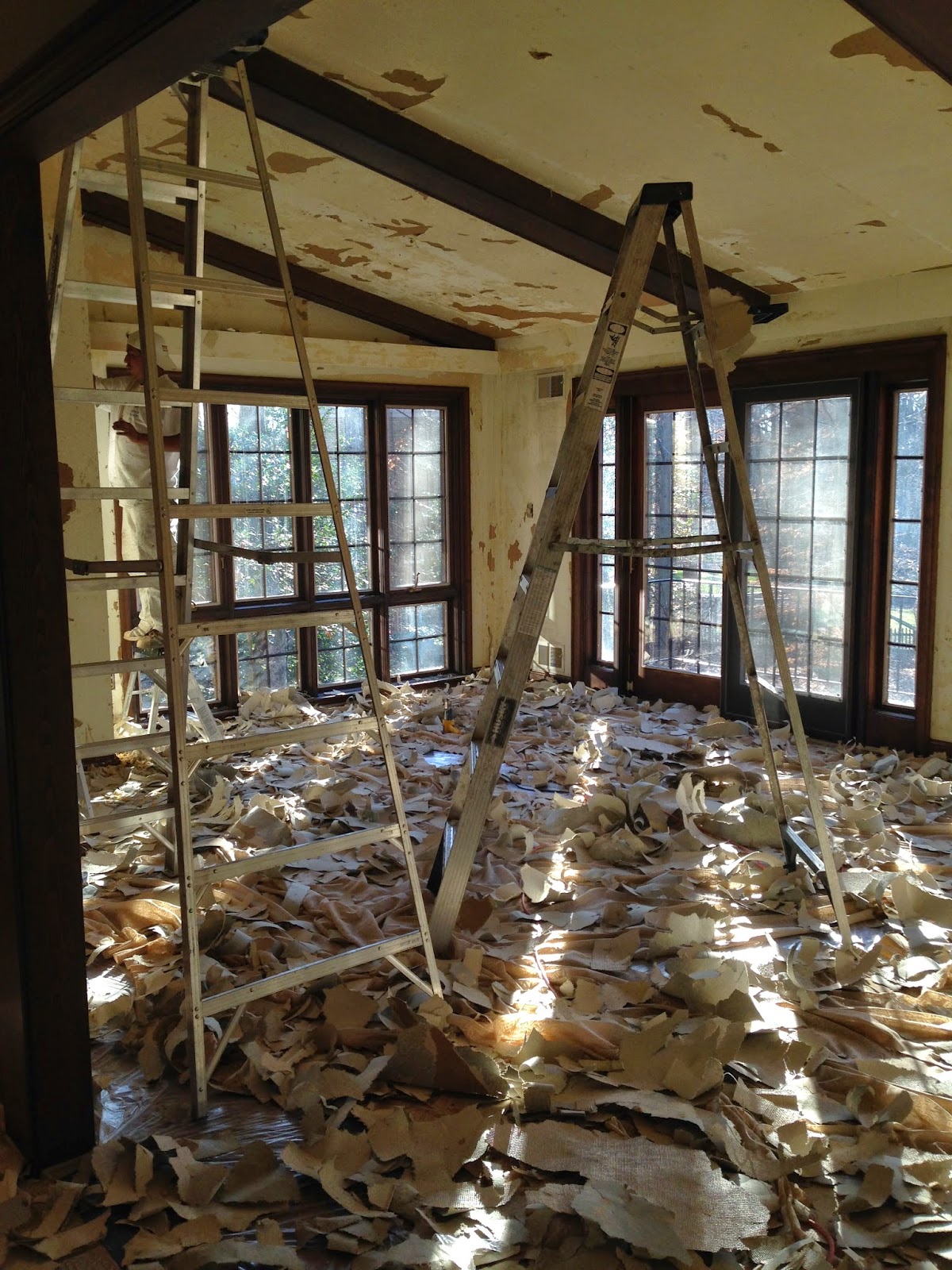 Before we move in later this month, I plan to finish painting the brick in the basement and the risers on the foyer stairs. I also hope to get most of the curtains hung. The new runner for the foyer stairs and the carpet in the basement will be installed a couple of days before we move in. The hubby has been busy replacing all of the electrical outlets and switches and has a few more rooms to complete.

There's also a long list of projects that won't start until after we move in including:


And then there's the list of projects that we won't start for at least six months including:
Phew… I can't believe how much has already been accomplished! We still have a lot of work to do, but the house is really feeling starting to feel like our home.
Posted by Amanda

Email ThisBlogThis!Share to TwitterShare to FacebookShare to Pinterest
Labels: House

Looks amazing, Amanda. Great job! You have such a fabulous eye. I can't wait to see it come together. xxoo!

I can't wait to visit next month!! It looks fantastic!! I especially liked the pink grey and white stipes!