A Party for Pirates

I know its not the most origional theme, but my son is REALLY into pirates. So to celebrate his 5th birthday we invited a handful of his preschool friends to a pirate themed party at a local children's museum. I made all sorts of pirate goodies to make the party extra special for my favorite little buccaneer. 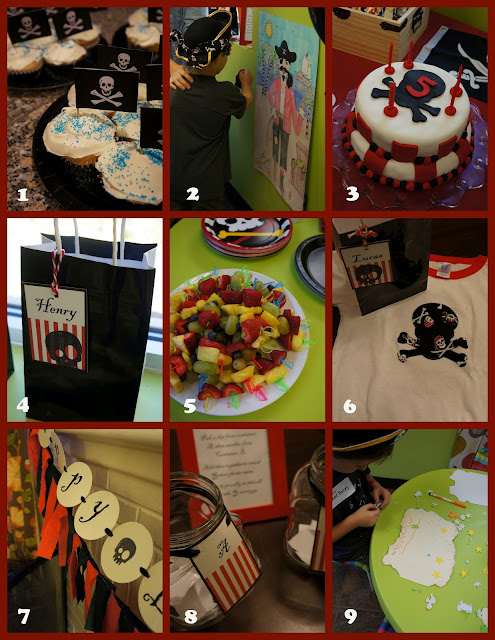 1. Cupcakes for school. So these weren't used at the party, but I had to include them in the round-up. I printed black rectangles adorned with sculls and bones, cut them out, folded them in half, and used double sided tape to secure them around tooth picks.

2. Pin the Parrot on the Pirate. With my son's input I drew a pirate on a piece of poster board. I found a parrot image in Word's clip art browser and printed and cut out out a bunch of parrots. I used double sided tape to stick the parrots to the pirate. The kids loved this game.

3. The cake! This is my third fondant cake ever. Each time I am getting a bit better at working with the stuff. This time I ordered my fondant from www.cakesupplies4u.com. It was cost effective and the quality of the Fondant was great. The total cost of the cake was $37. At least 1/2 of what I would have paid for a similar cake from a bakery.

4. Favor bags and tags. The bags are from Target. I printed the tags on my computer then embellished them with this stamp.

5. Fruit kabobs. If you want kids to eat fruit, serve it on tiny swords.

6. The favors. Each bag contained an eye patch (from Target - sold in packs of 4 in the party section), a little pirate figurine (sold in packs of 12), and tee shirt. I bought the tee shirts here and appliqued a skull and cross bones on each one. This sounds like a lot of work, but it was a small party so it's not like I was making dozens of shirts.

7. Bunting and banner. I didn't get a good picture of either at the party, so here they are on our mantel. To make the bunting I cut 18"ish long strips of crepe paper, sewed a ribbon down the middle of all of them, then folded them over. To make the banner I printed letters in Word on my computer and cut them out with my paper cutter. I used black ribbon to string them together.

8. What's your pirate name? This little party game was a hit with the kids and grownups. Basically guest picked an adjective from container "A" (stinky, skulking, treacherous, dark, salty, crooked) and combined it with a noun from container "B" (beard, waters, bones, sands, ship, hook) to create their pirate name. Parents helped kids to write their names on peel and stick name tags.

9. Make your own treasure map. Rather than just supplying plain white paper for this activity, I used a lighted to burn the edges of off white paper. I also supplied the kids with lots of stickers and markers to embellish their maps.
Posted by Amanda