I've always liked the look of steamer trunks. They are reminiscent of a bygone era, can add an industrial edge, and are very functional. 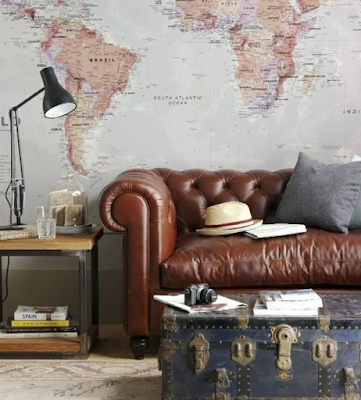 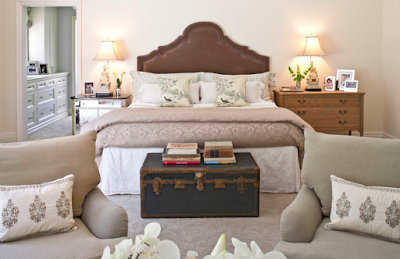 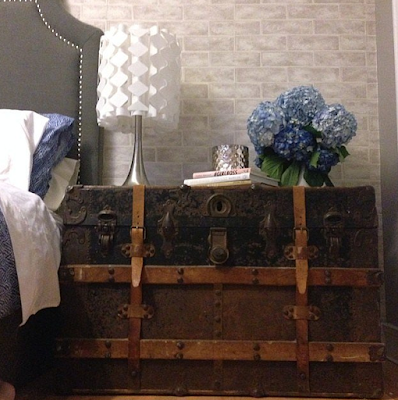 Nearly two years ago, I brought a pretty sad looking steamer trunk at Value Village. It was only $20 and I knew with a little elbow grease it could be great. Then we sold our house and moved and it sat in the rental house garage with the rest of the project pile.

The lower half of the trunk had some water damage. The black canvass covering the wood on the exterior was flaking off and the interior liner was totally deteriorated. I liked the size of the trunk (its quite tall) and most of the hardware was intact (although it had been repainted with some sort of gold enamel). 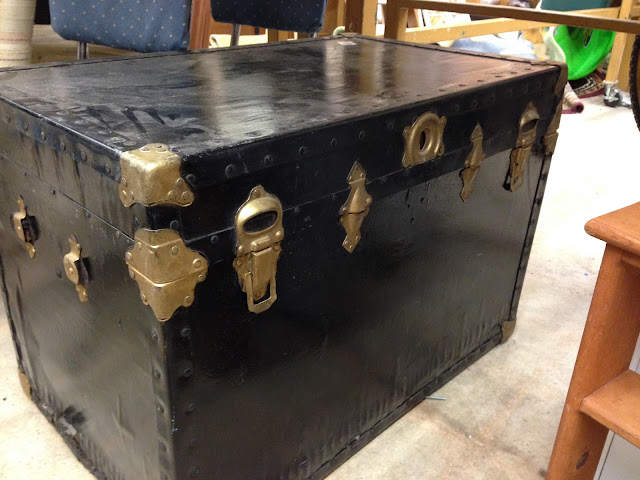 When I finally got around to working on the trunk, the first thing I did was remove all of the water damaged canvass. Unfortunately, the nail strips on the bottom sides of the trunk were also quite damaged and also had to be removed. After scraping I used my mouse sander to sand all of the surfaces. While sanding the top I revealed the maker's tag under a layer of black paint/polish. 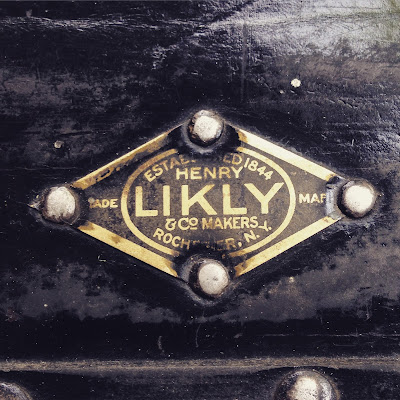 This little tag allowed me to do a little research on the history and age of my trunk. A google search led me to a blog called My Old Steamer Trunk where I learned that Henry Likely and Company was the name of the company from 1870 (when Likly became a partner) until 1925 when it simply became Likly's. I was pretty excited to learn that my trunk is at least 90 years old.

I also learned the trunk company was the largest factory of its time in the state of NY. The company shipped all over the U.S. and even to parts of Europe.  At the height of production, the company used over one million feet of lumber and produced 30,000 trunks annually.

After scraping as sanding I used wood filler to smooth the transition between the wood and the canvass. This took a couple of coats of filler and lots of sanding. 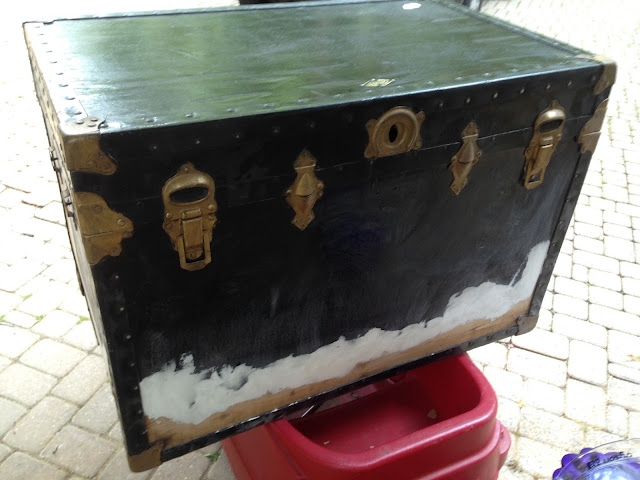 I used 3 parts chalk paint and 1 part water to get a smoother texture. I painted everything including the hardware, but not the Likly tag. I used shims to prop the lid open so that it would not be painted shut. After two coats of paint, I hand sanded the edges and hardware to reveal some of the metal hardware. 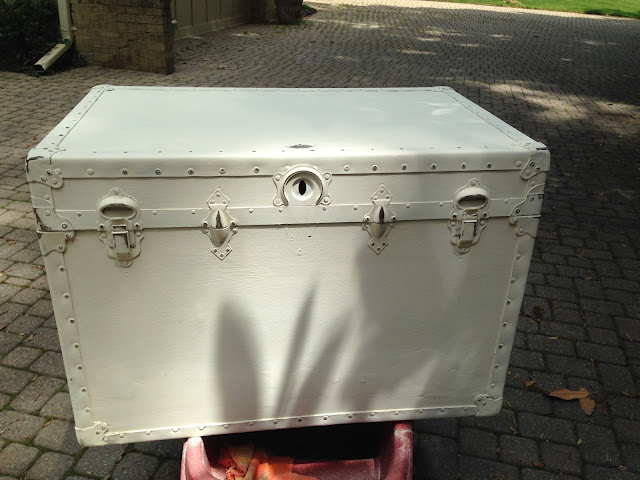 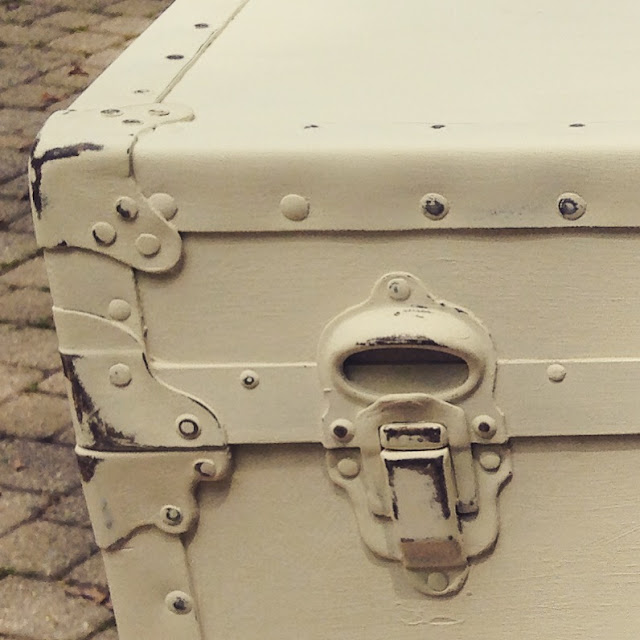 Finally, I applied the Annie Sloan wax. I had a piece of glass cut to fit the top of the trunk and I placed it against a wall at the bottom of the stairs in the basement. 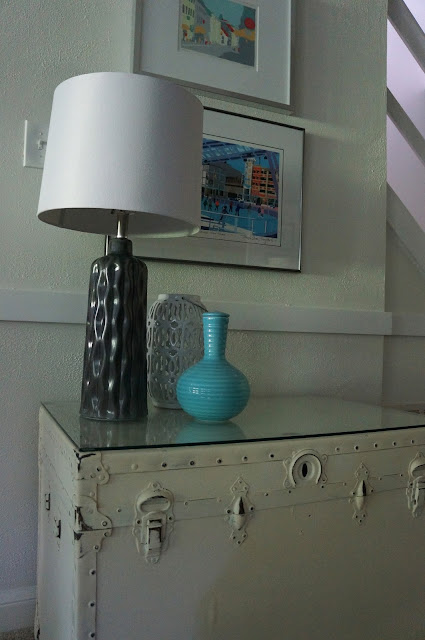 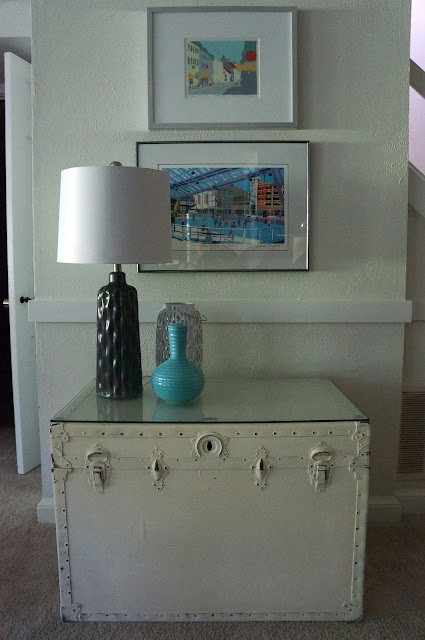 The trunk is a nice addition to our eclectic mix of furnishings. The lamp is also a new addition.  I like it's mid century vibe - similar to these from West Elm, but was a steal at Home Goods for $35 (shade included).
Posted by Amanda