Dear Readers, sorry for the very long hiatus. The last few months of 2009 were incredibly busy and stressful. We found out we were pregnant, sold our home, our son and I moved in with my parents, we bought a home, moved in to our new home after a blizzard, and have begun tackling many projects in our new “old” house.

I don’t expect life to slow down too much, especially with a new baby on the way (which by the way is a girl) but I do promise to post more frequently in 2010. Trust me, with a house built in 1949, with rooms of varying shades of pink – there is MUCH work to be done. The first room we tackled was Elliot’s. I really wanted him to have a finished, organized space when we moved in. Brian and I were literally up all night getting the job done before he, the dog, and his VA grandparents arrived at the house on December 23rd. Did I mention that we closed on December 21st?

I designed the room around a darling quilt that Elliot’s CO grandmother made him for his second birthday. The fabric is printed with illustrations from one of his favorite books, Brown Bear, Brown Bear What Do You See? by Eric Carle. With such a bright and fun comforter, I decided to paint the room a neutral color and used Benjamin Moore’s Tapestry Beige. The mural is Rust-oleum tint-able chalk board paint in School House Green. To create the mural I drew templates for the cars, trucks, etc on poster board then simply traced them on the walls. It took about 4 coats of chalk board paint to fill them in. It was less time consuming that the mural in Elliot’s nursery and he is already enjoying creating his own art on the walls. I just have to remind him that “we only color on the green walls”.

All in all the room came together pretty inexpensively. We either had all of the art work or it was given to us (i.e. the Curious George pictures came from friend who recently redecorated her son’s room). As for the furniture: the dresser was a gift, the night stand was a steal ($59 at IKEA), the rug was also IKEA ($149), and the bed was thrift store find ($60) that I sanded and painted with a glossy coat of Benjamin Moore’s Old Navy.

I’d still like to add a few things to the room like a book shelf, window treatments, and a little seating area. I promise to add updated photos when I do! 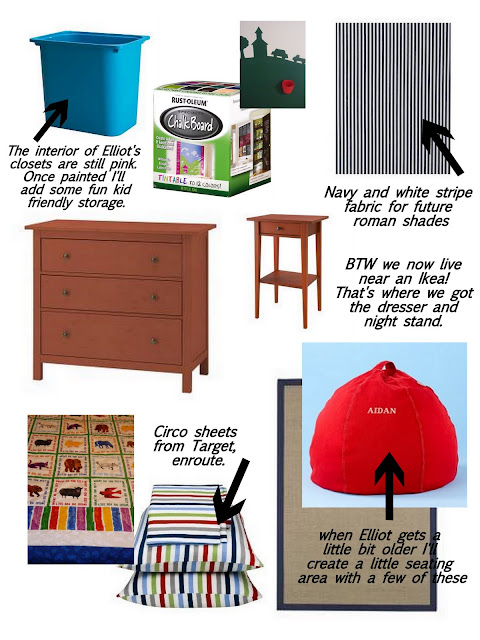 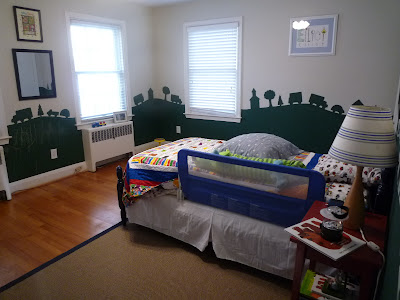 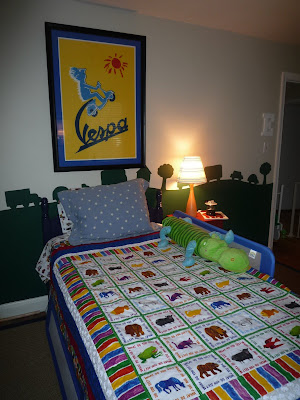 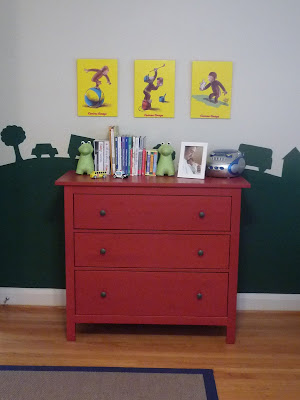 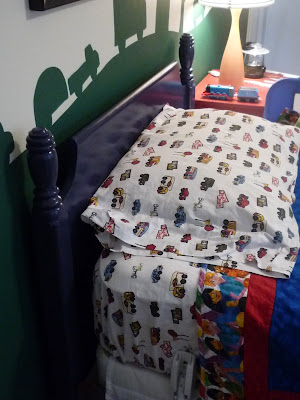 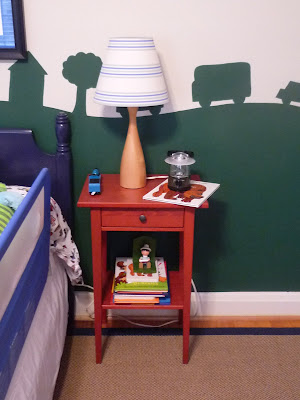 Looks awesome, Amanda! I love the idea of mural with chalkboard paint. Elliot's such a big boy! Good luck with the new old house -- I can't wait to see what you do with the place! xxoo

I love it. It is bittersweet to see this "big boy" room as it is awesome (as everything you touch in life is!) but yet it solidifies the fact that he is no longer a baby. Time flies...

I cannot wait to get my invite to the open house.

What a cute room, beautiful quilt and I love the red furniture. Great job!

That's what "moving in style" should be about. You went full-throttle redesigning and updating the house. So how's your home after a year? Did the kids like their new rooms?

At least you can now rest well after the major renovations and furnishing has been done. It was kind of scary how you still pushed through with the move despite the blizzard, but I guess nothing can stop anyone from building a home.